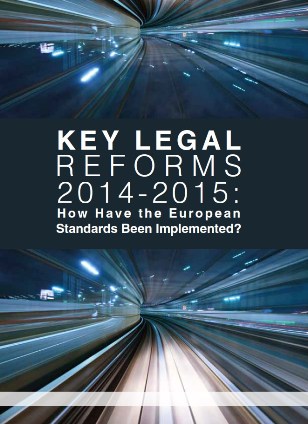 Key Legal Reforms 2014-2015: How Have the European Standards Been Implemented? (in English)

For two years, the experts of the Centre of Policy and Legal Reform have been measuring the progress in three reform areas — constitutional reform, judicial reform, and prosecutorial reform — which are seen as key for the rule of law, by using a new tool known as the Reform Speedometer (eu.pravo.org.ua).

This Speedometer shows the degree of Ukraine’s implementation of European standards and recommendations in the relevant areas. This report focuses on key events that have influenced the development of legal reforms and, consequently, the Speedometer indices, and their significance for European integration.

Key Legal Reforms 2014-2015: How Have the European Standards Been Implemented? from Centre of Policy and Legal Reform